For our April style competition, my homebrew club decided to try a Breslau-Style Pale Schöps. I had never heard of this until my club president brought this up as an option, and a bit of searching online finds virtually nothing. This is a historical style, native to the area of Breslau (now Wrocław, Poland). The Brewer’s Association added it to their style guide for the GABF a few years back, which I can only imagine must have been a special favor for someone, because there just ain’t any commercial examples out there now.

In any case, I only found a handful of recipes online, and many (all?) of these were by people asking, “So, I made up this recipe and does it look plausible…” This meant I decided to just use what I’ve learned over the years, and try and put my own recipe together.

From what I read about the style, it should be mostly wheat malt in the grist (up to 80%), with a bready flavor and aroma aspect and a full body. Although this is a wheat ale, it wasn’t supposed to have German wheat ale yeast–instead, a fruity character was described, without phenols. Hops are in the background on this, too.

With all of this information, I put together a grain bill that was mostly wheat malt (~70%), backed up by equal parts pilsner and biscuit malt. I elected to go with a German ale yeast, the classic WLP029. For my grains, I wanted to go with European malts, choosing those from Viking because at least some are sourced from Poland. This seemed appropriate for the brew! I had no idea if I would like this batch or not, so I aimed for 3 gallons instead of the full 5.

The name is a German-ish (highly inauthentic and untranslatable) pun on “Sheep’s Head,” just because I thought it sounded funny and vaguely like the word “Schöps.”

I’m getting that itch again, to brew with new styles and new ingredients. With winter on the horizon, I want to stock up on some beers that will serve well on a chilly night next to the fire. I also recently realized I haven’t brewed with smoked malt before. So, a smoked porter seemed like just the thing to try.

In assembling the recipe, I drew heavily upon an Alaskan Smoked Porter clone from the American Homebrewers Association website. This was augmented with a Smoked Robust Porter recipe, also from AHA. Because I wanted this to be a fairly rich base porter that would stand up to the smoke, I elected to go with Vienna malt for the majority of the grist. Conveniently, I also have a decent bit still in stock. To add an American emphasis, I’m going to use whole Cascade hops from South Dakota as the bittering hops, with a charge of Willamette at the very end.

Once I got to the homebrew shop, I discovered that they had several different kinds of smoked malt in stock. I had been planning on using a beechwood-smoked rauch malt, but the owners suggested trying a peachwood-smoked malt instead. I was intrigued!

The malt itself is from Copper Fox Distillery, a Virginia-based operation that specializes in small-batch whiskeys and such. They have also started a brew malt operation, with a handful of products. Because the maltster is so new and so small, it is very difficult to find any specific information on the malts. Their website didn’t have any real information, but Southern Hills Homebrew Supply did. I also learned a bit in chatting with a local person who is helping to distribute Copper Fox malts in California. The bottom line is that this is a floor malted, smoked 2-row barley malt. The aroma and flavor profile are supposed to be a bit gentler than in traditional beechwood-smoked malt. Based on what I tasted and smelled during the brew, this very much seems to be the case. The aroma is delightfully aromatic and smoky, but the flavor in the wort is not at all overpowering.

As for the name of this recipe? Well, because I am using peach wood malt, I wanted to honor peaches. The scientific name for a peach is Prunus persica, reflecting its close kinship with plums (and thus prunes) as well as the fact that domesticated peaches entered Europe via Persia. However, peaches themselves have a deeper origin in China; the oldest fossil peaches clock in at around 2.6 million years old. As a frame of reference, our genus Homo was just getting started around that time, and the modern Homo sapiens was still 2.4 million years away! 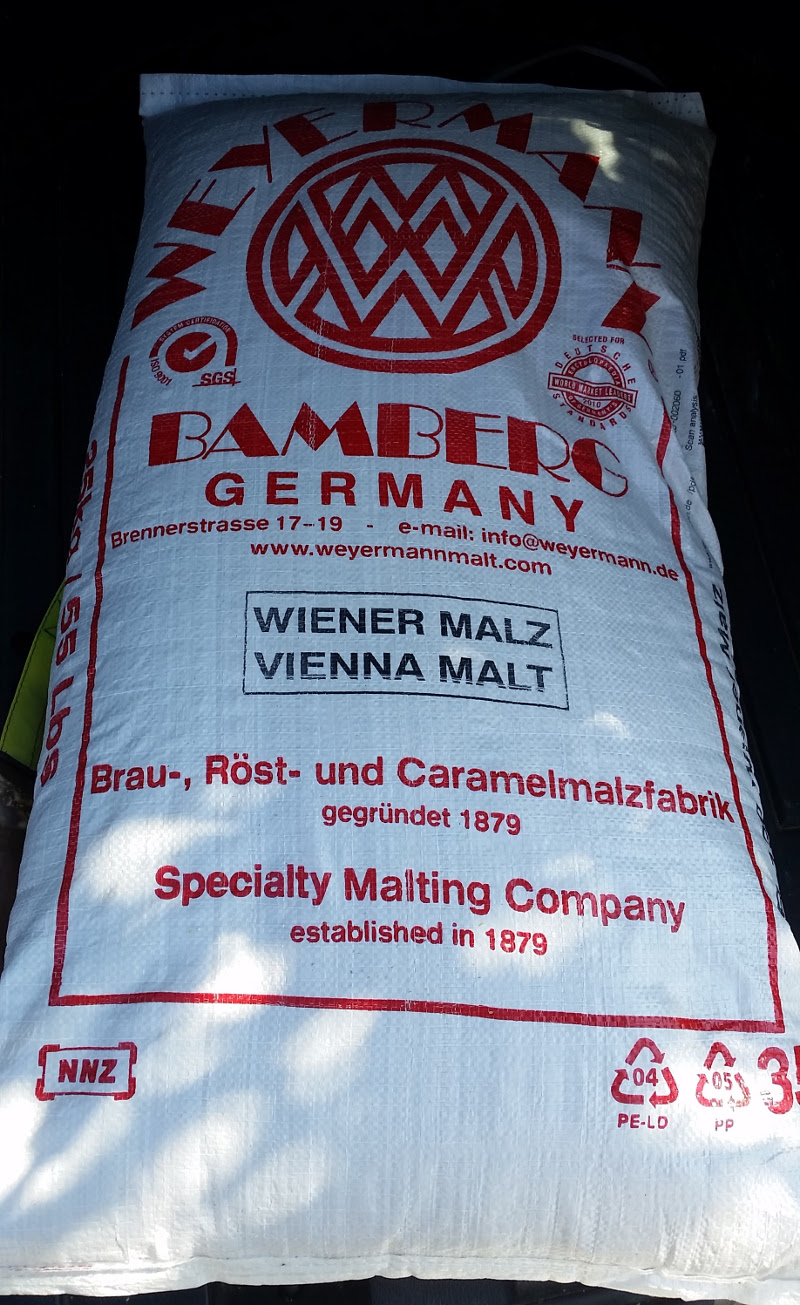 Many of my recent brews have explored styles that are new to me–saison, Bohemian pilsner, witbier, and altbier, to name a few. This has been a ton of fun (and produced some tasty results), and I am ever-searching for new ways to expand my brewing repertoire further. For the next round of exploration, I want to really delve into Vienna malt. My standard base malt has been American 2-row, and last winter I spent a bit of time playing with Maris Otter too. I’ve certainly brewed with Vienna malt as a minor ingredient, but still don’t feel like I have a good handle on its flavor characteristics. Time to change that!

Descriptors for Vienna malt are typically vague–phrases like “full-bodied” and “golden colored” don’t really tell me much about the flavor itself. “Toast” and “biscuit” aromas are also supposed to be present. I’m not yet confident what this means within this particular malt, so I need to find out firsthand.

Thus, I recently purchased a 55 pound bag of Weyermann Vienna Malt from my local homebrew shop. I plan to do a whole series of brews with it during the rest of 2016. First up is a brown ale, then an IPA, and after that a classic Vienna lager (because it would be a shame not to!).

My brown ale recipe for this time around is fairly simple, veering towards the malty side (which I like in a brown ale). I have a good feel for what the various crystal and chocolate malts taste like, so this batch makes a solid first chance to get my brain cells around the overall properties of Vienna malt.

As we inch closer and closer to the southern California version of spring, it’s time to wind down the “winter beers”, and start gearing up for some spring and summer brews. A kölsch seems like a good start for this. After thumbing through back issues of Brew Your Own, I found a recipe that is just the ticket. Vitamin K Kölsch Clone is a recipe mirroring a beer from Thunder Island Brewing Company, featured in the May/June 2014 issue of BYO. My adaptation of the recipe would probably horrify style purists, because I’ll be using American 2-row malt as the backbone. Then again, I’m not brewing this in Cologne, either, so authenticity (or indeed, the right to call it a kölsch) is out the window from the get-go.

I’m using White Labs WLP029, German Ale/Kölsch yeast. Following the calculations from my brewing software, I needed about 1 L starter (~1.040 starting gravity). This was prepared roughly 36 hours in advance of pitching; I haven’t yet made a stir plate, so I am relying instead on constant agitation. It took nearly 24 hours before I saw any real signs of activity in the starter (e.g., extensive foaming when agitated, etc.). The starter initially (for the first 24 hours or so) had a prominent fruity aroma, which is quite different from starters I have made for other strains. This transitioned into the more expected “yeast/bready” aroma after 30 hours or so. I am going to presume that this is just a characteristic of the strain (nothing online mentions typical aroma for this strain’s starter).

Following exceptional efficiency (75% and 83%) in my last two all-grain recipes, I have adjusted my equipment profile accordingly in BeerSmith to assume average efficiency of around 78%. Additionally, I will be tweaking my temperature settings a touch, based on the fact that my mash was ending up just a degree or two warmer than target on most occasions. I am heating up my mash tun with hot tap water prior to mashing in; in the past, I’ve been assuming a mash tun temperature of 75°. For BeerSmith calculations in this batch, I will assume a pre-warmed mash tun temperature of 130°.

Things finally seem to be clicking along with my all-grain setup; I’ve got my mash tun properties dialed in, my grain mill configured, and everything else coming up aces. The all-grain learning curve is perhaps a bit frustrating, after feeling like I was so proficient at extract brewing, but it feels like the pay-off is finally here. I’m now getting consistent extract efficiency (thanks in large part to owning my own grain mill), and the beers are turning out quite tasty.

For today’s brew session, I wanted to play with a style I haven’t brewed previously: American brown ale. Looking back at the blog, I brewed a British-style nut brown from a kit a few years back, but that’s it! I got some advice from Ray Daniels’ Designing Great Beers, and set up a recipe in BeerSmith. I was also inspired by a recent visit to Rök House Brewing Company, which had an incredibly tasty SMaSH ESB; on asking, I learned that the wonderfully malty flavor was courtesy of Maris Otter malt. So, I knew I had to incorporate that into my next recipe!