I’ve done very little brewing with rye; this is a fairly common ingredient in commercial (and home) brews, but I rarely use it in my own recipes. A search of my blog found only two instances, in fact (a pilsner and an oaked ale)! Why not explore the ingredient a bit, then?

The December 2017 issue of BYO magazine had a clone recipe for Shoreline Brewery’s Red Rye Ale that looked pretty tasty. I liked that it incorporated several varieties of rye malt, and I also liked that it wasn’t just another rye IPA (although that style also is in my future). I made some minor modifications for my on-hand hops, and also substituted in Weyermann CaraRye for non-Weyermann crystal rye, which I couldn’t find readily (it was supposed to be equal amounts of CaraRye and crystal rye).

In the past, I’ve noticed that my higher gravity mashes, as well as mashes with a percentage of flaked grains, tend to come in a bit lower on mash efficiency. So, I assumed 70% for efficiency (instead of my usual 75% or so), and managed to come pretty close.

My goal with this brew is to have a medium body, malty brew that will serve well during the winter months. The brew session was fairly uneventful, helped along by a generous portion of rice hulls to prevent a stuck sparge. My only minor disappointment was that I ended up a shade below my target gravity (1.068 vs. 1.072). Because I am hitting my preboil volumes and gravities fairly well, I think I just need to improve the vigor of my boil.

I also tested out my oxygen wand setup; I had a bit of a disappointment recently with a stuck fermentation on a high gravity brew, so wanted to avoid that in this batch, which was supposed to clock in slightly above 1.070 for starting gravity.

The name, if you couldn’t guess, is a pun on “overdrive”, so named because of the hefty dose of rye malts. The “V” at the end is because I used California Ale V yeast. 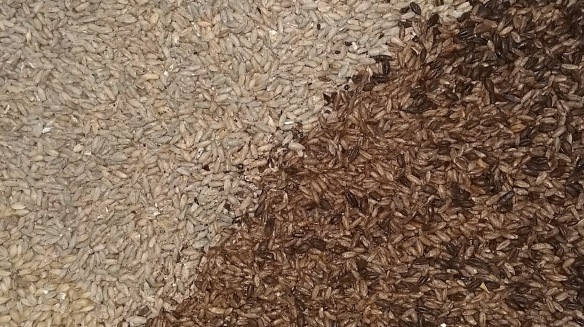