Skip to primary content
The past year has seen some major changes in my brew practices, most prominently in the transition from extract to all-grain. It has been fun to stretch my abilities and add new techniques to my toolkit, although not without its frustrations, either. There is a whole new learning curve to master!
One of the toughest projects has been to master my mash efficiency. Where you can get really, really consistent gravities quite easily with extract (I would rate this as a big “plus” for extract brewing), I’ve found less consistency in my all-grain. From my reading and conversations with other brewers, “crush” hits the top of the list for improving efficiency. So, with that in mind, I purchased a two-roller mill from Monster Brewing Hardware. Their mills are pretty consistently well-rated, so it seemed wise to follow that reputation. It will be really nice to be able to control my crush more precisely–the local homebrew shop generally gave me good results, but now I can mill grains exactly to my home specs. This also makes it logistically easier to get big bags of my base malts (see photo). By buying in bulk, I can cut the per batch cost significantly. 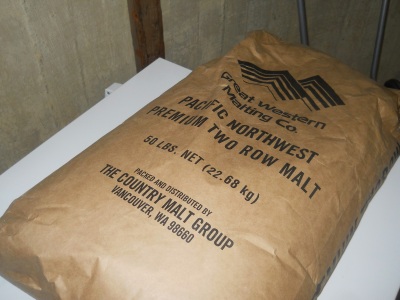 It took me a bit to figure out what I wanted to brew for the first batch with my new mill. I had thought about a simple amber ale–but, I already have a fair bit of IPA and pale ale on hand (and apparently an amber ale is just a variant of a pale ale–makes sense, but I hadn’t thought of it this way before!). So, a good porter seemed like a great alternative. It will round out my beer stock nicely.

After a bit of thought and searching, I elected to go for a clone recipe that I’ve tried versions of before. One of my favorite beers is the Edmund Fitzgerald Porter, courtesy of Great Lakes Brewing. It’s tough to find out in California, but I have had it a few times on tap or in the bottle when in the midwest or out east. For this batch, I stuck much closer to the original recipe from the North American Clone Brews book. The only mild variation was to have Cascade as strictly an aroma (steeping) hop at the very end, mainly because I forgot to pick up a little more at the store.