A few weeks back, I wrote about my first attempt at a cider. The recipe was dead simple (in fact, I called it Dead Simple Hard Cider), and the whole thing had fermented out in around two weeks. It clocked in at 5.4% abv; not too much, but not too flimsy, either. 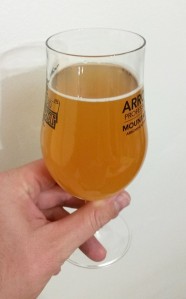 The cider has maintained a consistent haze throughout its serving lifespan, and has a very thin and not terribly persistent head (unsurprising for a cider). It’s somewhat copper/gold in color, and has a nice apple aroma (with maybe a hint of something like diacetyl?). On the flavor end of things, it’s pretty dry, but not puckeringly so. I like the crispness that this brings. The flavor is…well, apple. It’s fairly tart, like the sorts of apples you would expect for a cider. More Granny Smith than Golden Delicious.

I put this cider squarely in the win column. It hit all of the marks I was hoping for, and is surprisingly drinkable. I might try backsweetening a future batch, but not by a lot. I like my ciders tart and dry! A different yeast variety, perhaps something with a bit more character, is also in the cards. A 3 gallon batch was about perfect, too. Cider is a nice treat, but not something I really want 5 gallons of. As the keg nears its end, I’m still enjoying it! And that’s a good state to be in.