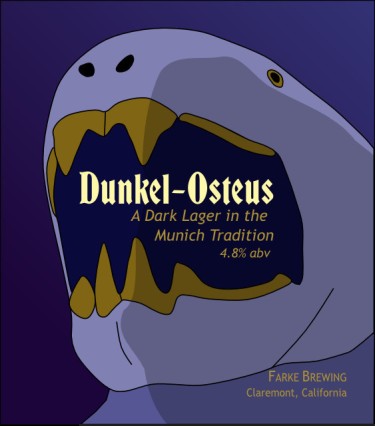 I love brewing new styles, and I also love a bad beer pun. The unholy marriage between the two: Dunkel-Osteus!

For this batch, I’m making a Munich dunkel. It’s a reasonably dark, malt-forward lager, in a style that I’ve not brewed previously. Musing over what to call this batch, I remembered a famous prehistoric fish, Dunkleosteus. Dunkel-Osteus was a match made in prehistoric pun heaven!

Dunkleosteus lived around 375 million years ago, during the Devonian (also known as “The Age of Fishes”). It was a giant animal, with sharp bony plates lining its jaws rather than teeth. The largest species were huge, clocking in at around 20 feet in length and a ton in body mass. These were top-tier marine predators, and are a popular exhibit in many museums today. Dunkleosteus and its close kin were an early side branch in vertebrate evolution–nothing exactly like them is around today. However, we humans inherited a common feature from the way-way-way-back ancestor we share with Dunkleosteus: our jaw bones! The open-and-shut jaw arrangement and the major bones that make up our mouth had their origins in some humble fish back before even Dunkleosteus (see this scientific paper on the evolutionary relationships of these organisms). Although the extent to which the jaws of Dunkleosteus and its kin are directly tied to our own has been debated, the latest evidence strongly suggests that they have the same essential bones and are based on the same genetic blueprints, with some evolutionary tweaks. So, next time you open wide for a tasty lager, think about how amazing it is that you are using some of the same skull bones that Dunkleosteus had! 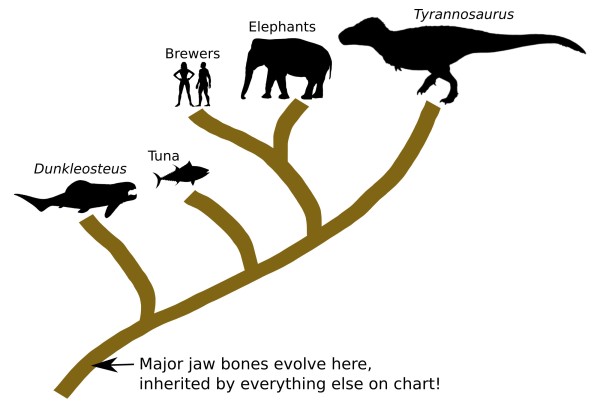 The fossil fish Dunkleosteus was named in honor of David Dunkle, a paleontologist at the Cleveland Museum of Natural History way back in the 1950s. As such, the prehistoric organism has nothing to do with the Munich Dunkel style (and indeed, Dunkle and Dunkel are spelled differently). Nonetheless, I couldn’t pass up a good pun!

The recipe is modified slightly from a dunkel presented in Modern Homebrew Recipes, by Gordon Strong. I love the simplicity of Strong’s version–a base malt, two specialty malts, one variety of hops, and a yeast. I elected to use a single infusion mash rather than a decoction mash schedule, and upped the gravity a point or two (while still keeping it at the lower end of the style). I also replaced German Tettnang hops with American-grown Liberty, based on availability, and used dry yeast for simplicity. One major recommendations I retained from Strong’s book was to add the dark grains at vorlauf (in this case, the Carafa Special II), rather than leaving them in the mash for the whole duration. My goal was to have the Carafa just be for coloration, rather than for adding much flavor, and a short steep seemed like the best way to achieve this.