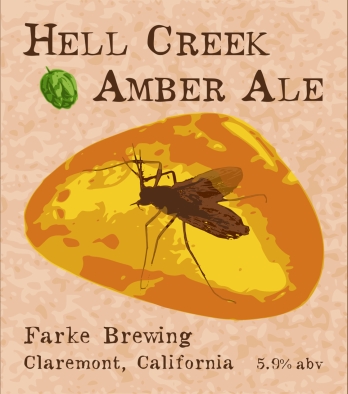 Gimmick beers can be a fun way to liven up familiar styles, especially when there is a good pun involved. A friend recently located some wild (or more likely, feral) hops growing on an old homestead in eastern Montana. This happens to be right on top of the Hell Creek Formation, a ~66 million year old package of rocks that preserves some of the last dinosaurs to live on the planet. It also yields fossil amber…and a pun was born!

Hell Creek Amber Ale makes a great name–but could I capitalize on it any further? How could I build a recipe around the concept?

Early on, I made a decision to use ingredients primarily from the home region of the Hell Creek Formation (Montana, South Dakota, and North Dakota). I had a small quantity of wild Hell Creek hops on-hand, and supplemented them with a few ounces of my dad’s Cascade hops from South Dakota. Malt presented a bit of a challenge, though. After some research, I learned about MaltEurop’s Montana malting facility. Fortuitously, one of their flagship products is billed as being malted from barley “grown in and around Montana.” The recipe was rounded out with a few non-thematic malts, to produce a nice American amber ale.

The base recipe is a modification of the American Amber Ale from Zainasheff and Palmer’s Brewing Classic Styles. However, I used American malt instead of English malt, and substituted Special B malt for some of the darker crystal malts suggested by the recipe. The latter gambit was to create a slightly richer flavor, evoking the deep color of fossil amber as well as the rich aromas that must have permeated the ancient Hell Creek landscape. I also modified the hop additions a bit–the only late addition was that of the wild hops, with a steeping to allow any interesting aromas and flavors to come to the forefront. The dried hops had a moderate herbal aroma, which I expect should play nicely with the caramel qualities of the specialty malts.