What I Wish I Knew When I Started Extract Brewing 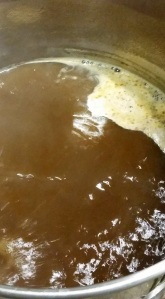 Nowadays, I’m mostly an all-grain brewer. But, like many brewers, I started out using malt extract, perfecting basic fermentation, sanitation, and packaging techniques that I still apply. I wasn’t always happy with the results, and like many people “blamed” it on malt extracts. Additional experience and some distance in time, though, make me realize many of the problems were the result of faulty techniques, not faulty ingredients. So, I put together this brief list of suggestions to help out other extract brewers, particularly those who don’t have time, space, or money to create an all-grain setup.

I plan to brew up an extract batch in the near future–it’s been quite awhile since I’ve done one, and it seems like a good idea to try out these techniques again!

This entry was posted in extract brewing. Bookmark the permalink.