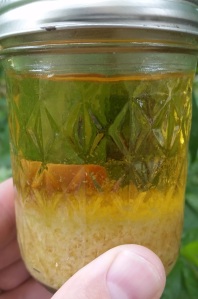 I’ve been having a lot of fun tooling and re-tooling my white IPA recipe. Because it has been some time since I last brewed up a batch, I wanted to bring this brew on-line again, with a few tweaks to inch ever closer to perfection.

The grain bill is essentially the same as my most recent batch, with the primary change being a switch to 2-row alone as the base malt. Hops are modified slightly in line with my current inventory, with Amarillo hops pellets instead of whole Cascade hops. The final component that I felt the beer was missing was a nice lemon background and aroma. One option was to use Lemondrop hops, but these are rather hard to get. Instead, I elected to craft some lemon extract (see photo at right). With the zest from four lemons and four shots of cheap vodka, I combined it all into a jar and did the “set and forget” routine. Once the beer fermentation is done, I’ll strain the mixture and toss it into the keg.