In the continued effort to expand my brewing universe, a Scottish ale seems in order. AHA recently posted a recipe for Bonnie Prince Charlie’s 80/- Shilling, an award-winning brew for a style that I’ve not made previously. I’m greatly intrigued by its simplicity–only two malts and one hop! The technique and flavor combinations promise to be something tasty for the winter season, too. I made only a few small modifications, for hops availability (I’ve got a bunch in my freezer, so it didn’t seem right to buy more) as well as for batch size (scaling down from 12 gallons to 5 gallons). 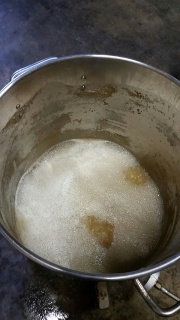