One of my favorite beers from last year was my Fake Tire Amber Ale (a clone of Fat Tire). The first batch was so good that I brewed it again! The second batch was largely the same as the first, except I used pelletized hops instead of whole hops. The unfortunate effect was that the beer was slightly more bitter. Thus, I decided to further refine my pelletized recipe for this brew session. Following advice elsewhere, I reduced the overall hops amounts by 10 percent, to compensate for the greater surface area (and contribution of bitterness) from the pellets versus the whole cones. I also changed the yeast, from Wyeast 1272 (American Ale II) to White Labs WLP051 (California V Ale), based on what was available at my local homebrew supply shop. 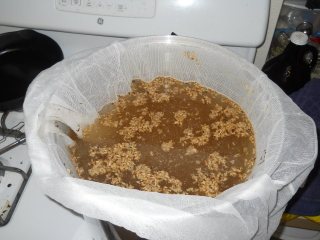